How did we get here?

In this sweeping, eloquent history of America, Kurt Andersen shows that what’s happening in our country today—this post-factual, “fake news” moment we’re all living through—is not something new, but rather the ultimate expression of our national character. America was founded by wishful dreamers, magical thinkers, and true believers, by hucksters and their suckers. Fantasy is deeply embedded in our DNA.

Over the course of five centuries—from the Salem witch trials to Scientology to the Satanic Panic of the 1980s, from P. T. Barnum to Hollywood and the anything-goes, wild-and-crazy sixties, from conspiracy theories to our fetish for guns and obsession with extraterrestrials—our love of the fantastic has made America exceptional in a way that we’ve never fully acknowledged. From the start, our ultra-individualism was attached to epic dreams and epic fantasies—every citizen was free to believe absolutely anything, or to pretend to be absolutely anybody. With the gleeful erudition and tell-it-like-it-is ferocity of a Christopher Hitchens, Andersen explores whether the great American experiment in liberty has gone off the rails.

Fantasyland could not appear at a more perfect moment. If you want to understand Donald Trump and the culture of twenty-first-century America, if you want to know how the lines between reality and illusion have become dangerously blurred, you must read this book.

END_OF_DOCUMENT_TOKEN_TO_BE_REPLACED

Cyril Avery is not a real Avery or at least that’s what his adoptive parents tell him. And he never will be. But if he isn’t a real Avery, then who is he?

Born out of wedlock to a teenage girl cast out from her rural Irish community and adopted by a well-to-do if eccentric Dublin couple via the intervention of a hunchbacked Redemptorist nun, Cyril is adrift in the world, anchored only tenuously by his heartfelt friendship with the infinitely more glamourous and dangerous Julian Woodbead.

At the mercy of fortune and coincidence, he will spend a lifetime coming to know himself and where he came from – and over his three score years and ten, will struggle to discover an identity, a home, a country and much more.

In this, Boyne’s most transcendent work to date, we are shown the story of Ireland from the 1940s to today through the eyes of one ordinary man. The Heart’s Invisible Furies is a novel to make you laugh and cry while reminding us all of the redemptive power of the human spirit.

END_OF_DOCUMENT_TOKEN_TO_BE_REPLACED

Title: Hum If You Don’t Know the Words

Perfect for readers of The Secret Life of Bees and The Help, a perceptive and searing look at Apartheid-era South Africa, told through one unique family brought together by tragedy.

Life under Apartheid has created a secure future for Robin Conrad, a nine-year-old white girl living with her parents in 1970s Johannesburg. In the same nation but worlds apart, Beauty Mbali, a Xhosa woman in a rural village in the Bantu homeland of the Transkei, struggles to raise her children alone after her husband’s death. Both lives have been built upon the division of race, and their meeting should never have occurred . . . until the Soweto Uprising, in which a protest by black students ignites racial conflict, alters the fault lines on which their society is built, and shatters their worlds when Robin’s parents are left dead and Beauty’s daughter goes missing.

After Robin is sent to live with her loving but irresponsible aunt, Beauty is hired to care for Robin while continuing the search for her daughter. In Beauty, Robin finds the security and family that she craves, and the two forge an inextricable bond through their deep personal losses. But Robin knows that if Beauty finds her daughter, Robin could lose her new caretaker forever, so she makes a desperate decision with devastating consequences. Her quest to make amends and find redemption is a journey of self-discovery in which she learns the harsh truths of the society that once promised her protection.

Told through Beauty and Robin’s alternating perspectives, the interwoven narratives create a rich and complex tapestry of the emotions and tensions at the heart of Apartheid-era South Africa. Hum if You Don’t Know the Words is a beautifully rendered look at loss, racism, and the creation of family.

END_OF_DOCUMENT_TOKEN_TO_BE_REPLACED

Deep in the Niger Delta, officer Chike Ameobi deserts the army and sets out on the road to Lagos. He is soon joined by a wayward private, a naive militant, a vulnerable young woman and a runaway middle-class wife. The shared goals of this unlikely group: freedom and new life.

As they strive to find their places in the city, they become embroiled in a political scandal. Ahmed Bakare, editor of the failing Nigerian Journal, is determined to report the truth. Yet government minister Chief Sandayo will do anything to maintain his position. Trapped between the two, they are forced to make a life-changing decision.

Full of shimmering detail, Welcome to Lagos is a stunning portrayal of an extraordinary city, and of seven lives that intersect in a breathless story of courage and survival.

END_OF_DOCUMENT_TOKEN_TO_BE_REPLACED

Title: Born a Crime: A stories from a South African childhood.

The compelling, inspiring, and comically sublime story of one man’s coming-of-age, set during the twilight of apartheid and the tumultuous days of freedom that followed.

Trevor Noah’s unlikely path from apartheid South Africa to the desk of The Daily Show began with a criminal act: his birth. Trevor was born to a white Swiss father and a black Xhosa mother at a time when such a union was punishable by five years in prison. Living proof of his parents’ indiscretion, Trevor was kept mostly indoors for the earliest years of his life, bound by the extreme and often absurd measures his mother took to hide him from a government that could, at any moment, steal him away. Finally liberated by the end of South Africa’s tyrannical white rule, Trevor and his mother set forth on a grand adventure, living openly and freely and embracing the opportunities won by a centuries-long struggle.

Born a Crime is the story of a mischievous young boy who grows into a restless young man as he struggles to find himself in a world where he was never supposed to exist. It is also the story of that young man’s relationship with his fearless, rebellious, and fervently religious mother: his teammate, a woman determined to save her son from the cycle of poverty, violence, and abuse that would ultimately threaten her own life.

The eighteen personal essays collected here are by turns hilarious, dramatic, and deeply affecting. Whether subsisting on caterpillars for dinner during hard times, being thrown from a moving car during an attempted kidnapping, or just trying to survive the life-and-death pitfalls of dating in high school, Trevor illuminates his curious world with an incisive wit and unflinching honesty. His stories weave together to form a moving and searingly funny portrait of a boy making his way through a damaged world in a dangerous time, armed only with a keen sense of humor and a mother’s unconventional, unconditional love.

I really like Trevor Noah in The Daily Show. And I really like memoir audiobooks narrated by the author. So this book was just a perfect pick for me. Trevor shares with us an amazing story of childhood so much different than anything I know. He was born in South Africa when interracial relationships were illegal, but his mother was fearless and she wanted a child. She asked her white friend for that child. She was relentless so she got that child. So Trevor was born into a black family, but he was coloured. He wasn’t black and he wasn’t white. And at that time how you looked and what colour your skin was crucial. The whole system was based on that. There were towns where black people lived, where white people lived, coloured, Indian, Asian. How you lived and what you were allowed to do was based on how you were classified racially.

The story of Trevor’s childhood is centred around his mother. She is the true hero of his story and we learn so much about her. Trevor tells us about tough choices she had to make, about her stubbornness and fearlessness. She’s truly amazing women, and it was thought to listen to what happened to her at some time in her life. She’s extremely strong.

You can learn a lot while reading this book. It tells a story of life in the aftermath of apartheid. It shows us how hard it is to judge someone who committed a crime. How unjust world is. But the story also has its light moments. It’s not all serious. Trevor’s mother lessons about women and romance are very good. Stories of Trevor’s romantic endeavours are quite funny, cute and a bit sad. 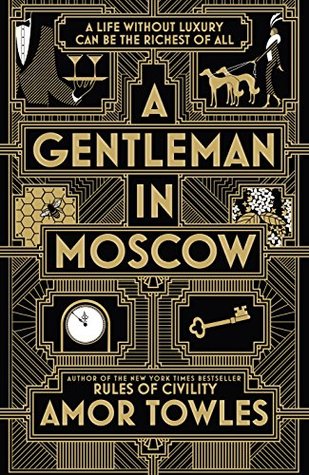 Title: A Gentleman in Moscow

On 21 June 1922 Count Alexander Rostov – recipient of the Order of Saint Andrew, member of the Jockey Club, Master of the Hunt – is escorted out of the Kremlin, across Red Square and through the elegant revolving doors of the Hotel Metropol.

But instead of being taken to his usual suite, he is led to an attic room with a window the size of a chessboard. Deemed an unrepentant aristocrat by a Bolshevik tribunal, the Count has been sentenced to house arrest indefinitely.

While Russia undergoes decades of tumultuous upheaval, the Count, stripped of the trappings that defined his life, is forced to question what makes us who we are. And with the assistance of a glamorous actress, a cantankerous chef and a very serious child, Rostov unexpectedly discovers a new understanding of both pleasure and purpose.

END_OF_DOCUMENT_TOKEN_TO_BE_REPLACED

Behold the Dreamers perfectly captures the sad truth that so many people need to fly they countries, their homes to find a better life or at least find a chance to get a decent life somewhere else. It also shows wishful naiveté of people believing that in a wealthy country that they know from TV their life is granted to be better. Escaping is just the first step.

I enjoy books with an immigration theme and Behold the Dreamers a great book about immigrants. In the days before the collapse of Lehmann Brothers illegal immigrant from Cameroon – Jende Jonga gets a job as a chauffeur for a Wall Street man Clark Edwards. Jende is fighting cruel American immigration system trying to get a green card; his lawyer advised him to petition for asylum. Jende believes that America is the place for him to become somebody and for his family to have a good life,  surely better than the one they could have in Africa. His wife Neni believes in America even more. END_OF_DOCUMENT_TOKEN_TO_BE_REPLACED