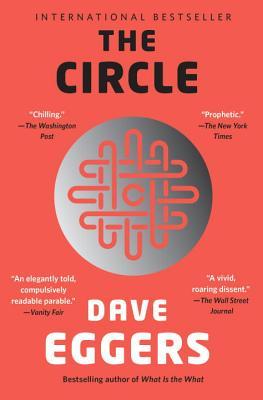 The Circle is the exhilarating new novel from Dave Eggers, best-selling author of A Hologram for the King, a finalist for the National Book Award.

When Mae Holland is hired to work for the Circle, the world’s most powerful internet company, she feels she’s been given the opportunity of a lifetime. The Circle, run out of a sprawling California campus, links users’ personal emails, social media, banking, and purchasing with their universal operating system, resulting in one online identity and a new age of civility and transparency. As Mae tours the open-plan office spaces, the towering glass dining facilities, the cozy dorms for those who spend nights at work, she is thrilled with the company’s modernity and activity. There are parties that last through the night, there are famous musicians playing on the lawn, there are athletic activities and clubs and brunches, and even an aquarium of rare fish retrieved from the Marianas Trench by the CEO. Mae can’t believe her luck, her great fortune to work for the most influential company in the world—even as life beyond the campus grows distant, even as a strange encounter with a colleague leaves her shaken, even as her role at the Circle becomes increasingly public. What begins as the captivating story of one woman’s ambition and idealism soon becomes a heart-racing novel of suspense, raising questions about memory, history, privacy, democracy, and the limits of human knowledge.

Yet again I read a book in Polish translation and I just cannot stand it. It took me ages to finish this book because the language was so stiff and fake and just didn’t have any flow. I’m pretty sure it wouldn’t feel as bad if I read it in English.

Anyway, putting the translation aside, this book is boring. Doesn’t matter how interesting the company and its ideas are, the story is boring. The main character Mea is inconsistent in her actions, in the beginning, she was sometimes just wanting to be alone and was overwhelmed but at the same time was acting strange when her ex-boyfriend was wanting the same in his life. At the beginning, she was completely believing in the Circle’s mission and reluctant to it. Overall, there wasn’t any logical character development. The was choppy, she was like that at this moment and in next part, she was completely different. It was similar with other characters that were also presented in any kind of depth. What I especially didn’t like was how the story didn’t seem full and consistent. There were moments when I felt like a part of the story was missing, we were presented with a change in the plot without any back story. I also didn’t like any of the characters, but that is not an issue. The issue with unlikeable characters is also that I didn’t understand them, they all were fake. There was no strong counterpart to the over-sharing privacy despising community – characters that were put in contrast to that community were weak.

I read this book because I’ve seen a trailer for the movie, and as it’s well-known book is always batter than a movie. But in this case, I’m pretty sure the movie will be better that the book. There’s no way the movie will be as boring.

9 thoughts on “The Circle by Dave Eggers”