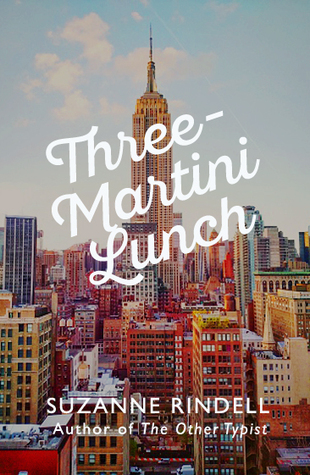 ‘Back in those days My Old Man was king of what they called the three-martini lunch. This meant that in dimly lit steakhouses all over Manhattan my father made bold, impetuous deals over gin and oysters. That was how it was done.’
New York, 1958. Three young adults desperate to make their mark on the world of publishing – their choices, betrayals and passions will draw them together and change their lives for ever. Cliff Nelson, the privileged son of a New York publisher, is slumming it around Greenwich Village, enjoying booze, drugs and the idea that he’s the next Jack Kerouac. Fresh-faced Eden Katz arrives in the city with one burning ambition, but she is shocked at the stumbling blocks she encounters. Miles Tillman, a publisher’s messenger boy, is an aspiring writer who straddles various worlds and belongs to none.

”Looking back on it now, I see that New York in the 50’s made for a unique scene. If you lived in Manhattan during that time you experienced the uniqueness in the colors and flavors of the city that were more defined and more distinct from one another than they were in other cities or other times.”

Another great story I read this year that takes place in New York city and gives a glimpse of the art world of the time, in this case of a publishing world. When it was perfectly normal to consider women not capable of performing high-risk jobs, hiring them only as secretaries that will eventually find a husband, get pregnant and forget about their short career. When it was perfectly normal to smoke in the office and have a drink, or three with your lunch (I assume that it still happens, but it’s not considered perfectly normal anymore). A time when some anonymous tip would make FBI question your political belief and your sexuality.

Three main voices in the book are young hip people, all sharing a common goal of making it in the publishing world, each in different ways.

“[…] in ’58 everyone still wanted to be a writer and in particular they wanted to write something truer and purer than everything that come before.”

Cliff is a son of a famous editor, university dropout from a family that comes from money. His father, wanting to teach him how to be a man, cut him off the family funds. Cliff is determined to become a writer. And being a writer and all the glamor that comes with it, is more important to him than actually writing.

“As I waved goodbye to Diana that day at the bus station I figured I might as well also wave goodbye to things like pot roasts and French tulle wedding gowns and Sunday bridge games and all the other things I was sure would be in her future but not in mine. […] I didn’t exactly envy Diana this life; nonetheless I felt a little mournful to think of thins this way; it was a little like being at someone’s funeral, and in a way I suppose I was mourning a version of myself that would never come to be.”

Eden is a new girl in New York that is determined to become an editor. She is different from all the other girls that try to get a job in a publishing house because she is not in it to find a husband, she really wants to become an editor, she is in it for a career. She’s a feminist character of the time, and through tough experiences, she learns how to make it in a man world.

“In my role as second son I had always attempted to fill the vacancies left behind by these two men, at times trying to be the role model to Cob I am certain Marcus would have been to me, at other times trying to hold my mother’s hand when Wendell was too drunk or absent or bitter to prop her up, and ultimately proving myself a piss-poor replace on both fronts.”

As they called him at the time, an educated Negro. He is a writer, he is passionate about writing and even Cliff noticed how good his writing is. Miles is the most conflicted character among the all, struggling with the guilt he feels about his father and about who he truly is. Miles is embarking on a journey that is taking him from NYC to San Francisco to find his late father’s journal that will help him understand if his father was a war hero or a thief and liar. And with that journey come other revelations about his life that he is too afraid to accept.

All the characters come to a place where they have to sacrifice something to gain something else, and decision on what is more important is always coming with some repercussions.
Amazing book! It really got me hooked, I was debating in last days whether I should cycle to work or take a bus and get some extra few minutes reading the book. It is written with such ease that you are just immersed in the world. Captivating read!