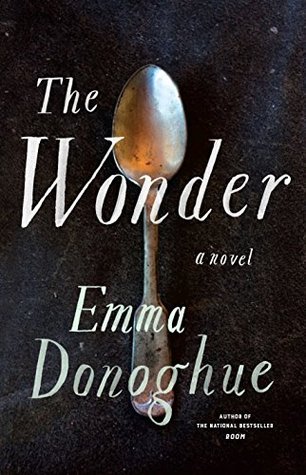 In the latest masterpiece by Emma Donoghue, bestselling author of Room, an English nurse brought to a small Irish village to observe what appears to be a miracle-a girl said to have survived without food for months-soon finds herself fighting to save the child’s life.

Tourists flock to the cabin of eleven-year-old Anna O’Donnell, who believes herself to be living off manna from heaven, and a journalist is sent to cover the sensation. Lib Wright, a veteran of Florence Nightingale’s Crimean campaign, is hired to keep watch over the girl.

Written with all the propulsive tension that made Room a huge bestseller, THE WONDER works beautifully on many levels–a tale of two strangers who transform each other’s lives, a powerful psychological thriller, and a story of love pitted against evil.

This was not at all what I was expecting. This book is an amazing mystery novel, and I didn’t think about it like that when I started. I was expecting that this wonder, that this miraculous not-eating girl will  be presented as true as if we were to believe that this is possible and that it happened. But we are from the very beginning faced with the obvious truth that there is no way that Anna, the miraculous girl, lived for four months without food. Lib, the nurse that is hired to watch over Anna for two weeks, is very sceptical of this whole endeavour. She was so sceptical and confident to expose the hoax immediately She was so sceptical and so confident that I resented her at the beginning, I couldn’t bring myself to like her. The feeling diminishes throughout the story, as I discovered characters that I hated, and just couldn’t read about without getting so, so angry.

The plot moves slowly. Only at the end, the actions become more chaotic and rapid. Before that, everything is slow and deliberate. We can slowly get to know Anna and her family. With Lib, we discover more and more of Anna’s secrets. We learn more about her religion, and how it influenced her decisions in her short life. Religion is the most troubling part of the book for me because it was so often used as a reason for indifference and inertness. It was frustrating to read about. That makes for a really good book, I wasn’t angry because it all didn’t make sense, and was just stupid. It was all perfectly presented, the truth of it all just made me angry at the world in general.

It is a very good mystery novel. A mystery novel like no other. It’s very unique. I highly recommend it to anyone who loves mysteries and would like to try something that is outside the common topic for this genre. Emma Donoghue yet again gave us a unique book. If you didn’t like Room, I think this book may make you reconsider Donoghue’s writing.

12 thoughts on “The Wonder by Emma Donoghue”