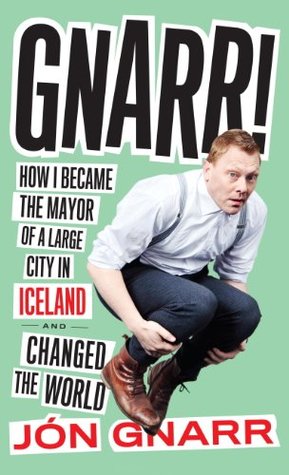 Title: Gnarr: How I Became the Mayor of a Large City in Iceland and Changed the World

In the epicenter of the world financial crisis, a comedian launched a joke campaign that didn’t seem so funny to the country’s leading politicians . . .

It all started when Jón Gnarr founded the Best Party in 2009 to satirize his country’s political system. The financial collapse in Iceland had, after all, precipitated the world-wide meltdown, and fomented widespread protest over the country’s leadership.

Entering the race for mayor of Reykjavík, Iceland’s capital, Gnarr promised to get the dinosaurs from Jurassic Park into downtown parks, free towels at public swimming pools, a “drug-free Parliament by 2020” . . . and he swore he’d break all his campaign promises.

But then something strange started happening: his campaign began to succeed. And in the party’s electoral debut, the Best Party emerged as the biggest winner. Gnarr promptly proposed a coalition government, although he ruled out partners who had not seen all five seasons of The Wire.

And just like that, a man whose previous foreign-relations experience consisted of a radio show (in which he regularly crank-called the White House and police stations in the Bronx to see if they had found his lost wallet) was soon meeting international leaders and being taken seriously as the mayor of a European capital.

Here, Gnarr recounts how it all happened and, with admirable candor, describes his vision of a more enlightened politics for the future. The point, he writes, is not to be afraid to get involved—or to take on the system.

Gnarr is a book I featured in my post TOP TEN TUESDAY: Books set in Iceland. I picked it up last week when I was in Iceland 🙂 It was a great, quick read for a wait on the airport.

Jón Gnarr six years ago became a mayor of Iceland capital – Reykjavik. The country’s largest city – more or less 200 thousand people live there, and that makes around 60% of Iceland population. What’s interesting for me, and I didn’t know about that before, is that second biggest ethnic group in Iceland are Polish people, they make up almost half of all the immigrants in Iceland.

I must say that Iceland is an amazing country, it’s beautiful and peaceful. They consider themselves a literature country, I heard that from two of my guides and Gnarr also mentions it in the book. They love to read, and they read a lot. Bookstores are one of the stores that are opened till late. They spend their Christmas reading together, whole family sitting down in their new pyjamas reading books they got for Christmas (how amazing is that?!). Icelanders are very artistic, the majority of them does music, Reykjavik is full of murals and strange and fantastic sculptures.

Getting back to the book. Jón writes about his journey to becoming a mayor. He mentions his troubled childhood and his troubles at school. He writes about his odd jobs and family. He writes about this all with an amazing honesty. He isn’t ashamed to write about anything. What I found most endearing was a story of how he dealt with a loss of his mother – sometimes he puts her lipstick and nail polish on, just to feel a little piece of her.

Gnarr also presents his view on the world, how he would like to change the world and how he would like Iceland and a whole world to look like. He’s a peaceful anarchist. He values human rights, he wants people to live with each other in peace and respect, he wants people to take care of less fortunate, to look after the environment. He wants a good life for everyone. And he tried to make a change in Iceland’s capital, where he created a new political party with his friends that weren’t involved in politics before but were good people, a lot of them artists. He tells an inspiring story, that change is possible, but we have to leave our armchairs and do something. If we don’t agree with the current state of things, we have the power to change it. If there is no one to vote for in elections, then create a new party that you would like to cast a vote for.

2 thoughts on “Gnarr: How I Became the Mayor of a Large City in Iceland and Changed the World by Jón Gnarr”